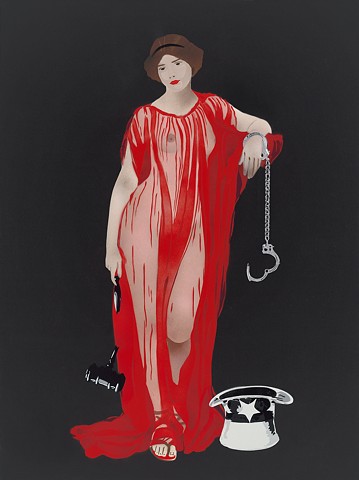 This is the fourth artwork the five-painting series on the PATRIOT (now USA FREEDOM) Act. The Fourth Amendment ensures the government cannot go into your property without informing you, and must therefore give you notice before it executes a search, i.e., the "knock and announce" principle. The PATRIOT Act unconstitutionally amends the Federal Rules of Criminal Procedure to allow the government to conduct searches without notifying the subjects (or doing so long after the search has been executed). The government can now enter a house, apartment or office with a search warrant when the occupants are away, search through their property, take photographs, and in some cases even seize property - and not inform them until later.

"Notice" is a crucial check on government power as forces the authorities to operate in the open, and allows the subject of searches to protect their Fourth Amendment rights by, for example, enabling them to point out irregularities in a warrant (such as a wrong address) or noting that the scope of a warrant is being exceeded (for example, by searching a home office desk in a search for a stolen car). Search warrants often include limits on what may be searched, but when the searching officers have unlimited and unsupervised discretion over a search, property owners cannot defend their rights. This expanded power can be applied as part of normal criminal investigations; it need not have anything to do with fighting terrorism or collecting foreign intelligence.

The figure around which this painting coalesced - Athenais from John William Godward's 1908 painting of the same name - was appropriated for several reasons. First, Athenais is an historical figure named after Athens, the first known democracy. Second, she is adorned in transparent dress, a theme I'm carrying throughout this series to symbolize a greater need for government transparency. Finally, she has a look about her of annoyance, consistent with one whose Fourth Amendment rights have been violated. [Note that the recent passage of the USA FREEDOM Act did not change this expanded government authority.]